Two journaleers and artists of human experience—a bi-polar working class warrior with a romantic streak you could drown a fascist in, and a cheerful nihilist in love with his own legend—took on the challenge of visiting every one of England and Wales’s 55 surviving pleasure piers in two weeks, because two weeks is as long as it’s possible to get off work—or not work, we have to get Midge home to sign on.

It wasn’t easy, but we did it… limping home in a car that needed pushing every time it slowed down.  Now for the hard parts, the therapy and the making of the book — it’ll be out in early 2016 from Summersdale. Sign up to one of our accounts, or the email list to be the first to know what’s going on.

Piers are the phallic symbols of our desire to own the motherly sea; our Victorian forefathers covered them with the lace dressings of amusement to prevent the working class getting too excited. Since then they’ve rotted slowly, like Britain’s empire and its self respect.

Those from Birmingham are perfectly placed to write about an ephemeral British seaside because that’s what the seaside is to them: a ghost, a Vaseline-smeared Shangri-La cobbled together from Carry On films, hazy childhood memories and nostalgia for a bygone era.

“On the Road meets On the Buses.” 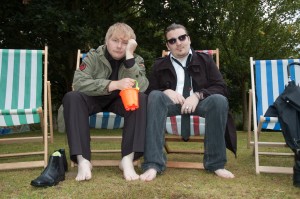 Jon (left, very, further than Scargill) is a writer and psychogeographer who’s been documenting Birmingham’s outsider culture on the website Birmingham: It’s Not Shit for ten years. He’s also written on culture, politics, and other things for The Birmingham Post, Fused, Area Magazine and The Guardian. He eeks out a living doing stuff with social media and education.

Danny (right, about everything)  is a writer and ne’er-do-well, his work has appeared in Vice, Fused, and Area magazines. His writing has also appeared on the internet for over ten years on various websites including his own, he typically writes about culture, pop and otherwise, and his own experiences travelling through the subcultures.

Together they published and edited Dirty Bristow—a magazine with no rules—and wrote a long form article Concrete and Cocktails about a journey around their home city that when released as e-book reached Top 30 in the Amazon Chart.